Peers Must Not Be Silent Around These Injustices

When I first entered the professional world working in the mental health system, I never shared my lived experience in recovery from schizophrenia. This was for a few reasons.

First, I had spent so much time invested into my own recovery that I wanted to focus on my career, which was put on hold by my diagnosis. I also knew there was still stigma in the world, and I wanted to see how pervasive it was among practicing clinicians.

There came a point when I finally realized I couldn’t hide it anymore. That moment was when I truly got to know about peer support, and, supposedly, not being embarrassed of my diagnosis.

A few months into my career as a peer professional, the leadership in the peer network began to unravel. My peer supervisor was clearly becoming more and more unable to supervise, was increasingly agitated, and ultimately, was openly and visibly delusional.

Her relapse opened my eyes to an entire unspoken stigma that is still rampant in the mental health system today.

You would think someone at my mental health agency, or someone with a good clinical background, would have intervened and connected my supervisor to treatment, speak openly to her about her shift in presentation, and how it might affect her ability to carry out her job responsibilities.

Or at the very least, carry out her ultimate termination and exit from the agency with savvy, understanding, and most importantly, without the shame and stigma we peers fight against in our work. None of this was the case.

Rumors were spread about the peer supervisor who went ‘crazy,’ behaved bizarrely, and in turn, created problems and a bad name for the peer network. All of this was extremely disillusioning. I had just openly ‘come out’ as a peer, and my supervisor, a so-called expert in recovery, fell victim to her own mental health disorder.

Thinking back now, the peer network in the agency could have used this as a learning moment for us all and made it clear that we were all vulnerable to mental health issues, and that we should always be mindful of what can possibly happen to each of us.

The agency could have used this as an opportunity to develop protocols on how to handle such a situation. What happened next was even more disillusioning.

Anytime one of us would ask for her, we were told the same thing: ‘It’s been quiet, nobody has said or knows anything about what’s happening, or how she is.’ Even more ironic is that some of us knew this person personally, and I would think we would have a vested interest in her health.

Very few people reached out to this person in crisis, and ultimately, after her job too was terminated, there were again, no learning lessons. Instead, there was a whole lot of taboo, stigma, and shame surrounding her mysterious departure.

No discussion at all around the bigger implications of these seemingly reoccurring and understandable issues among peers.

If my supervisor had been a clinician, instead of just a peer professional, the entire situation would have been handled very differently.

Social workers, psychologists, and other clinicians are all openly confronted about their mental health status, changes in their presentation and in general terms, medical health and well-being.

What I recommend to all disillusioned peers and all people working in the mental health system with a diagnosis is not to be afraid to speak up, and to be bold and authentic about your history.

The same thing that is feared by some will embolden others to be open and honest about themselves.

Until all of us, who are potential victims of injustice and prejudice, really come out and fight against this type of culture, it will continue to be stigmatizing, laden with shame, and the very stuff that makes us want to stop working on ourselves.

Pullout: ‘Until all of us, who are potential victims of injustice and prejudice, really come out and fight against this type of culture, it will continue to be stigmatizing, laden with shame, and the very stuff that makes us want to stop working on ourselves.’ 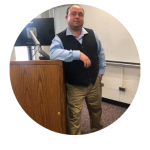